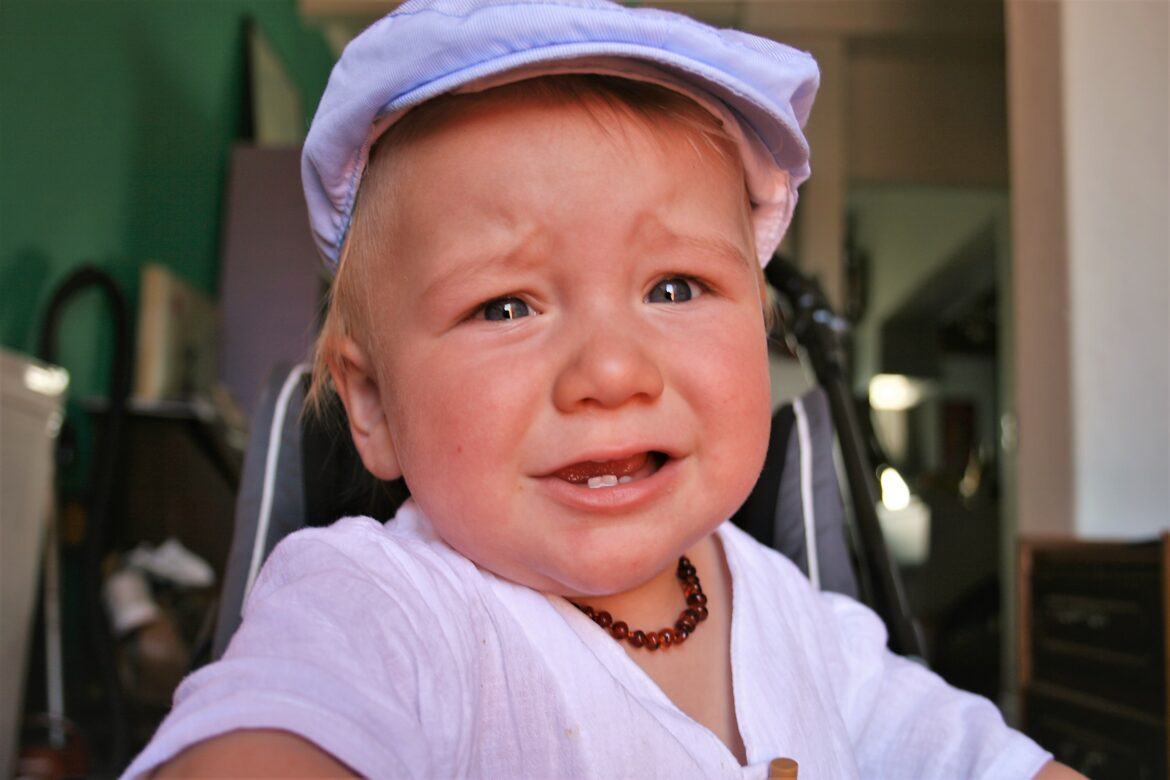 Teething. That wonderful time in a baby’s life that every parent looks forward to. Yeah, right. Teething is a painful and unavoidable process that everyone has to go through. It’s a tough time for your little one and it’s no picnic for you either. So what can you do when baby is cutting teeth to help relieve his symptoms and make you both feel better? Here are a few ideas to help you soothe a teething baby.

What to do when your baby is cutting teeth:

When Do Babies Start Teething?

All babies will start teething on their own schedule, just like with all the other milestones. They’ll generally follow a similar pattern to you, though, if your parents can remember that. Teething schedules are hereditary.

Most babies will start to feel pain at around 4 months and then sprout their first teeth at around 6 months, though it could be earlier or later. The two front ones on the bottom are usually the first to appear, making them look so cute even if they are miserable little mites. The front teeth on top will show up soon after.

There’s something called the “Rules of Fours” which is handy to remember. Your baby will probably get four new teeth every four months from six months onward until they have them all at around two and a half. 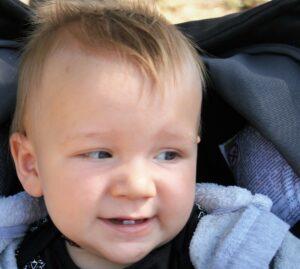 What Are The Symptoms Of Teething In Babies?

There are a number of different signs that your baby is teething. They may suffer from one or two or all of the symptoms if they are really unlucky.

Teething symptoms can often be confused with other ailments such as ear infections. Babies sometimes pull at their ears when they are teething because the pain is referred to the ears. Ear infections are usually accompanied by cold symptoms, a snotty nose and sometimes a cough. If baby appears to have a cold and is pulling her ears it may well be an ear infection.

Teething fevers usually run low, so if your baby is running a fever higher than 38.3°C (101°F) it’s probably a good idea to visit the doctor. The thing to remember is that babies won’t act progressively sicker when teething so if they do seem to be getting worse it could be something other than teething.

Something cold pressed against little flaming gums can bring great relief for your baby. There are a number of things you can use, just make sure they are clean and safe.

A soft, clean washcloth can be dampened and then put in the freezer for half an hour. For extra anti-inflammatory action soak the washcloth in chamomile tea before freezing.

A frozen banana or an ice pole works well, just make sure you’re keeping an eye on them so there’s no chance that anything could break off and get stuck in their throat.

Frozen fruit works well when put into a silicon mesh feeder. I had one of these for my boy and he loved sucking frozen raspberries through it. These feeders take away the risk of choking on larger chunks of food. 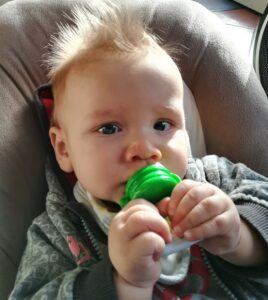 There’s a whole host of teething toys that can be kept in the fridge. Make sure they are made from safe materials (silicon rather than plastic) and filled with just water, in case they spring a leak.

The simplest thing you can do that works great is to massage your baby’s gums with a clean finger and let them gnaw on your knuckle. Once the teeth start making an appearance this can get a little dangerous for you, though. Babies jaws are remarkably strong and new teeth are surprisingly sharp!

Wooden or silicone teething rings work great. The counter pressure of biting down on something seems to relieve the pain somewhat so make sure you have a decent selection of toys for baby to choose from. Some can be kept in the fridge for that extra bit of relief from the cold.

I was given a lovely teething ring when Jesse was born. It was made of wooden and silicone beads, in different shapes and with different textures. My son really seemed to enjoy it, especially the star-shaped bead. I think the edges helped with the itchiness of the gums.

I also bought a teething mitt. The idea is great and I thought it would be perfect, but my son is a big boy and his hand barely fit in it when I bought it. Needless to say, it wasn’t used for very long.

The teething egg is a pretty popular toy these days. It’s made from completely safe materials, is too big to be considered a choking hazard and attaches to baby’s clothes so is always in reach.

The matchstick monkey is a classic and is still really popular. It’s easy to hold and the shape is great for reaching all areas of the gums.

There’s nothing wrong with giving baby a soft toothbrush to chew on. It will give their gums a nice massage and get them used to the toothbrush for future use.

There are a couple of different types of teething jewellery. The type that baby wears that has a natural pain reliever, or the type that mum wears and baby can chew on. 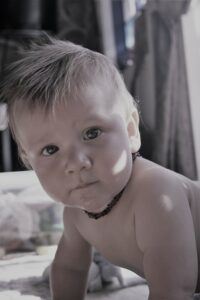 I swear by Baltic amber necklaces, even though there’s no solid scientific proof to back them. The Baltic amber releases something called succinic acid when warmed by the skin and this is a natural pain reliever. My son has worn one since he was 6 months old and has hardly suffered at all with his teeth. If used incorrectly they can pose a choking and strangulation hazard so be sure to follow the safety guidelines. They must only be worn when baby is awake and supervised. Never let him sleep in or chew on the necklace.

There are also a variety of necklaces and bracelets that you can wear yourself. Now you won’t be scoring any fashion points with them but they can be handy for keeping your baby satisfied while you’re holding her.

The FDA has recently released a report warning of the dangers of using certain over-the-counter teething medicines, but there are some natural remedies that are safe, effective, and can be made at home.

Chamomile is a great anti-inflammatory and pain reliever. You can brew a tea and freeze some in a mesh feeder. Soak a washcloth in the tea and freeze that. Offer baby a little cool tea to drink or dip your finger in it and massage their gums.

Rosehip tea can also work wonders. It’s high in vitamin C and antioxidants and can be used in the same ways as chamomile tea.

Essential Oils are amazing but you have to be very careful when using them, especially with babies. There aren’t many that are safe to use on babies and the ones that are need to be well diluted with a carrier oil. One drop of chamomile or clove oil in a tablespoon of carrier oil (coconut, sweet almond or olive) can be rubbed onto the gums to help relieve pain and itchiness. A couple of drops of lavender oil in the bath will help baby relax and may help you all get a better night’s sleep.

It’s not easy, for baby or you, but it’s not constant and it won’t last forever. In the meantime there are plenty of things you can do to help soothe those poor little gums and generally make life a little easier for both of you.

One last thing, never underestimate the power of the boob. Breastfeeding is a great comfort for upset little ones, and breast milk contains natural pain relievers. Just be careful baby doesn’t decide to chow down mid feed!