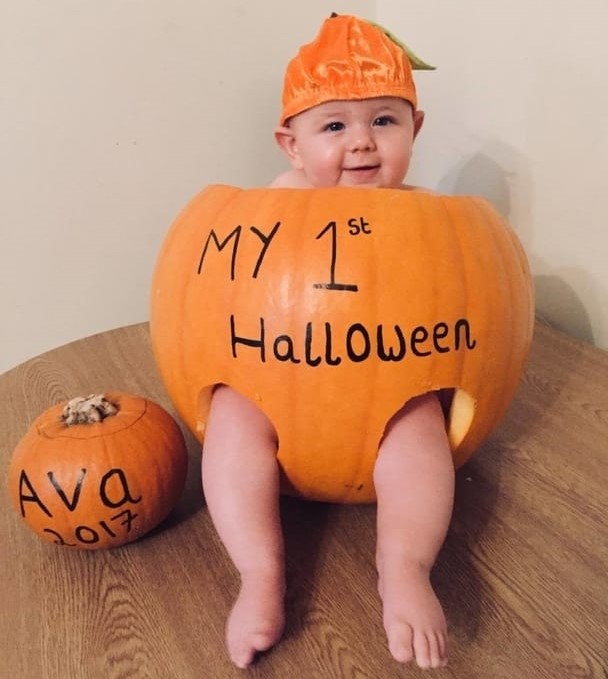 I love Halloween. It’s my favourite holiday. I guess it’s because I’m a massive horror film fan. My friends and I always dressed up and threw a Halloween Party. Things are a little different now I’m a mum. Carving out pumpkins and traipsing around the neighbourhood collecting candy is how I roll nowadays. But like a well-carved Jack-o-lantern, Halloween still lights me up, and my amatuer photography fetish definitely gets fed this time of year. Check out these tips on how to take great Halloween Baby Photos.

It’s no good propping your baby in position and then remembering that you haven’t fixed the backdrop up or put the settings on your camera. Like any great star, your baby isn’t going to be very happy if you make her wait.

Likewise, if you’re trying to photograph your toddler sitting on a chair, it’s highly unlikely they’ll still be there when you come back from fetching the little hat you want them to wear.

Have a plan. Set your scene. Make sure you have your props to hand. Get the right settings on your camera. Dress your kid up in whatever outfit or costume they’re wearing, and only then introduce them to their stage.

With everything ready beforehand you might just be lucky enough to get a few snaps before all hell breaks loose.

2. Don’t Expect Them To Pose

Kids are gonna do what they are gonna do. You can ask, bargain, beg and plead, but if they don’t want to point their knees to the side and look back over their shoulder, they sure as hell won’t. Posed photos of children often look pretentious and unnatural anyway. Let them relax and do what feels right to them.

Don’t try to project your ideas of how you want them to be on to them. Just let them be themselves. Children are naturally uninhibited and unselfconscious. Capturing them in candid moments, where their real emotions shine through, is what’s going to give you the best pictures.

Trying to get them to do something that they either don’t quite understand or just don’t want to do will soon make them close down. They’ll stop enjoying themselves and you’ll lose their cooperation.

3. Involve Them In The Process

Ask them about their ideas. What kind of photos they’d like to take? Involve them in making their costume or at least in applying the makeup. Gather up the props you want to use together.

If they are involved in the whole process, rather than just brought in and plonked down at the last minute, they are more likely to want to have fun with and participate in the process.

If you want them to look at the camera then talk to them while you’re shooting. Tell them a story, make them laugh. Or if they are really tiny wave their favourite toy around behind the camera.

5. Get Down On Their Level

There’s nothing worst than having loads of photos of your babies, all taken from an adult’s perspective. Sorry, that’s a bit dramatic. There are millions of things worse than that but still, it’s pretty dull photography.

When photographing kids you need to change up the angle. Get down on their level, eye to eye. Get even lower and shoot up at them. Play around with different angles in different settings. If you’re kid’s dressed up as Godzilla then shooting low will make them look huge and add to the whole monster effect.

Of course, there is a place for shooting from above. It’s common practice with newborns especially as it makes them look so tiny and sweet. But in general, you’ll want to mix it up to make things more interesting.

Toddlers don’t hide their emotions. They are written all over their smushy little faces. It’s your job to capture them on film. A great way to do this is to hand them an object that you know will provoke an emotion.

As it’s Halloween let’s imagine you’ve handed them a tub of slime. Give them a moment to investigate the item. Be ready and waiting with your camera. As soon as they look up, you start snapping away. Whether it’s disgust, amusement or pure glee, that’s emotion and you want to capture it.

One of the great things about a Halloween Photoshoot is that there are plenty of activities that offer opportunities for capturing great moments. From getting ready, to trick or treating, to apple-bobbing, to eating too much candy. Be ready with your camera and you’re bound to catch loads of memorable moments.

All too often, especially if we’re photographing kids in costume, we focus on getting the whole scene in shot and forget about the details. Sure, you’ll want a few shots that show the full scary witch outfit or your lovingly crafted backdrop. But don’t forget to get in close and shoot those chubby little hands and feet.

Take an extreme close-up of that giant smile. Get in close and capture the details because you’ll remember the whole picture in years to come, but how much will it move you to come across a photo of those fat little toes that you used to want to nibble on.

All of the above tips apply to photographing children in general, but as it’s Halloween we’re talking about you’ll want to reflect that with the lighting. Using low, orangey light will set the tone for your photos.

Street lights and porch lights are good to use for that soft glow.  You’ll need to set your ISO up high when shooting in low light. And it’s probably a good idea to use a tripod or stand your camera down on the table or a stack of books. With the camera stabilised you can use a much slower shutter speed which allows more light to get in.

If you want to shoot outside then try to catch the magic hour, just before sunset. It’s the best time for shooting. The light is soft and there’s something ethereal and ghostly about it. It’s great for creating ambience.

9. Think About The Story You Want To Tell

Chose locations that compliment your kid’s costumes. Eerie backdrops can add a real sense of atmosphere and bring the whole scene to life.

If you’re more interested in showcasing the costumes though, then just keep the background simple. A plain wall, a background of leaves, anything that pulls all the focus to your little one will work.

Your photos don’t have to be the typical shots that you expect on Halloween. Traditional is good, but don’t be afraid to just do your own thing. Sometimes the best Halloween photos only show a suggestion that it’s Halloween, like this one of my son below.

I absolutely love this picture. It’s my favourite Halloween picture, yet there are no monsters, no costumes, no scary spiders. It’s just a nod to Halloween. It’s subtle, and I like that.

This is another great example of something you can do for Halloween that isn’t going all out. The girls wore their hair like this for school on Halloween and were both very happy about it.

Whatever your Halloween photos turn out like, as long as you all enjoyed yourself, they’ll be precious to you in the years to come. I really doesn’t matter if they aren’t perfect, or you didn’t capture the moment you were planning to get. When you look back at them, you won’t care that this one is slightly out of focus, or that one is a little bit over exposed. It will be the happy memories that you’ve captured, no matter how crudely, that will matter. Just have fun with it. You’ll get better every year.