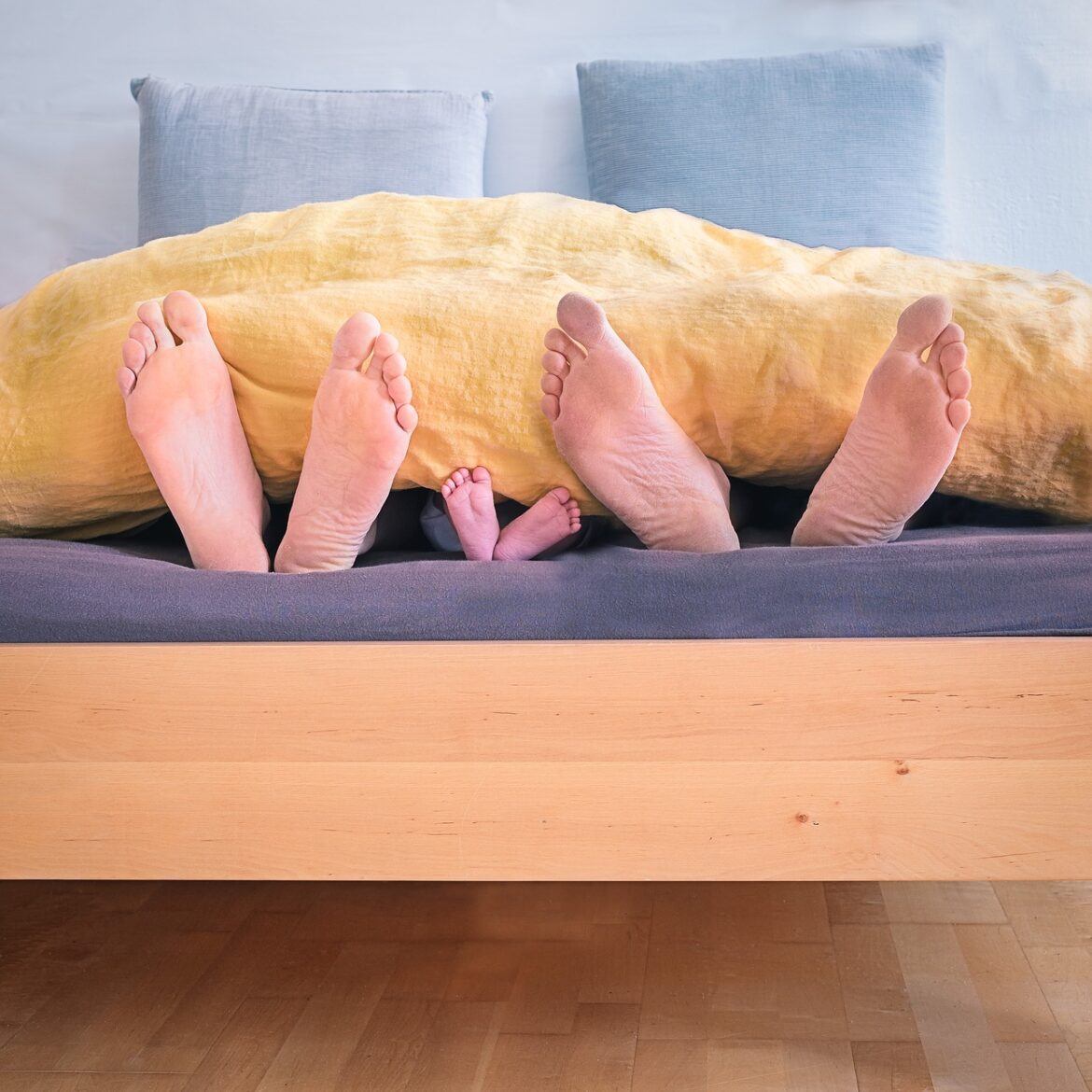 Everyone has a different idea about the ideal sleeping situation of their new baby. And then the baby has his own ideas too. Deciding whether to co-sleep or not is a very personal decision. Here’s a quick run-through of the pros and cons of co-sleeping.

I’m a huge fan of co-sleeping. My son has been sleeping in my bed with me all of his little life so far. Even those first few days we spent in the hospital, I kept him in bed with me and the nurses didn’t seem to have a problem with it.

I think we slept better than all the other mothers on the ward. We’d all had C-sections and I honestly don’t know how they managed to keep getting themselves up to feed their babies. Any movement in those first few days was so painful. But I loved having him so close to me. My time in the hospital was blissful, despite the pain. Of course, there are pros and cons of co-sleeping.

It isn’t the right choice for everyone. I decided while I was pregnant that I wanted to give it a go but my original plan was that he’d sleep in a beside crib, not in the actual bed. I had it all set up and attached to the bed, and it stayed there for about a year but I don’t think he slept in it once. Unfortunately for my husband, baby moved in and he got to spend the next few months in the spare room. So no, it doesn’t suit everyone.

There’s a lot of controversy surrounding the subject of bedsharing. In the recent past many renowned pediatricians have given it the thumbs down. In fact, until recently the American Academy of Pediatrics said that babies should never be allowed to sleep in their parents’ bed.

It’s a strange view to have on something as intuitive as your child’s sleep. Especially as, up until the 19th century when separate nurseries were introduced as a sign of affluence, bedsharing was common practice that was widely used. Times may have been changing but an infant’s need for physical contact did not. It’s sad that affluence seemed to trump intuition.

It many other cultures co-sleeping is still considered a very normal practice. It’s only in America and Europe that it’s changed. In Japan, for example, bedsharing and breastfeeding are the cultural norm. Interestingly, Japan has one of the lowest rates of SIDS (Sudden Infant Death Syndrome) in the world.

We need to take into account that co-sleeping is generally used as an umbrella term, covering:

Everybody sleeps better – Baby will fall asleep more easily and will be easily soothed back to sleep upon waking. Many mothers and babies sleep cycles will sync up so that mum won’t be dragged out of a deep sleep when baby wakes. Parents are able to tend to the infant without getting up and awakening fully.

Breastfeeding is easier   – As baby starts to squirm they can be put on the breast quickly and conveniently without fully awakening, meaning mum and baby can fall back into a deep sleep more quickly. It’s also believed that milk-producing hormones work better at night when mum is relaxed. Co-sleeping mums tend to breastfeed for longer too.

Emotional bonding          – Parents report feeling more emotionally connected and having a better understanding of their baby’s needs. It promotes skin to skin contact which has been shown to reduce physiological stress.

Physiological Health       – Studies have shown that baby’s temperature, heart rate and breathing patterns regulate and are more stable. Being in the same room, but not the same bed, is thought to reduce the risk of SIDS.

Suits busy lifestyles         – If mum has gone back to work it can be a great way to spend more time with the baby.

Accidental injury             – There is always the possibility that a parent in a very deep sleep could unintentionally harm baby during the night.

Quality of sleep                 – For parents, the quality of sleep may be affected, either because they are uncomfortable or worried about sleeping next to baby, or because older babies are moving around a lot and disrupting sleep. Ain’t that the truth!

Sleep dependency            – It may be harder to get baby to sleep during the day without a parent sleeping with them.

Transitioning                    – It may be more difficult for you to transition baby from your bed to his own. He may suffer from separation anxiety.

Relationship Problems  – The lack of privacy, and possibly intimacy, may put a strain on the parents’ relationship.

Whatever you think about co-sleeping, it is starting to make a bit of a comeback in the Western Hemisphere, as part of the attachment parenting movement. There are good arguments both for and against it but in the end, it is a very personal choice of what suits each family the best. As long as it’s practised safely of course.

The most important thing to remember though is this. It’s not your sleeping arrangements but how responsive and open you are to your baby’s needs during the night that really matters.

The time has come for me to transition my son into his own bed. He’s 18 months old now and is very active in his sleep. I can’t remember the last time I slept through the night so that just goes to show that it’s not always easy. But having said that, I have loved the time we’ve spent co-sleeping and I wouldn’t change it for the world.

Which co-sleeping camp are you in? I’d love to hear your thoughts on the subject. And also any tips to help me out with the transition would be greatly appreciated. Wish me luck, got a feeling it’s not gonna be easy.