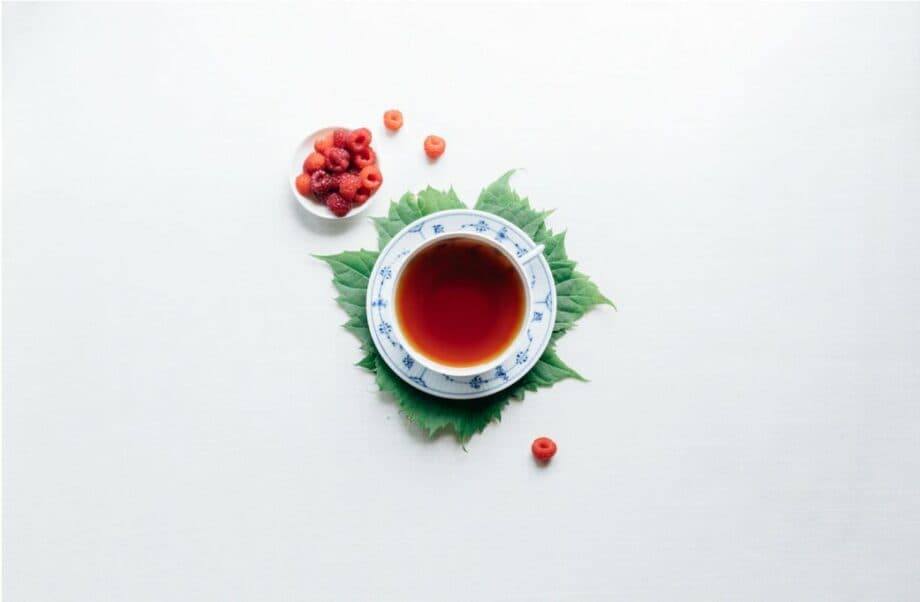 The nutrient-rich leaves of the Red Raspberry plant have been used in herbal remedies for centuries. While they have health benefits for everyone, they are particular suited to the female body and support women’s health through all stages of life.

One of the main benefits of Red Raspberry Leaf Tea during pregnancy is that it tones the walls of the uterus, help make contractions during labour more efficient and reducing labour time. It also reduces morning sickness symptoms, improves the strength of the amniotic sac. After birth, Red Raspberry Leaf Tea helps to balance hormones and increases the supply of breast milk.

Most of us probably only heard mention of this wonder plant when we were pregnant or were researching all things pregnancy. That’s because there are lots of benefits of Red Raspberry Leaf Tea during pregnancy, and it’s one of the few herbal remedies that pregnant and breastfeeding women can take.

What Does Red Raspberry Leaf Tea Do?

Red Raspberry Leaves are packed with vitamins and minerals, including calcium, iron, potassium and magnesium, and vitamins A, B, C and E. These are all vital for the female body and some of them, like magnesium, aren’t always easy to gain from diet. The nutrients are delivered in a way that is very easy for the body to absorb.

Some of its main benefits include boosting the immune system and regulating hormones. It also has antioxidant and anti-inflammatory properties and supports the respiratory and digestive systems. It’s beneficial for anyone suffering from the following conditions:

Drinking Red Raspberry Leaf tea during pregnancy has a number of benefits. It contains almost all the nutrients necessary for optimum uterine health, making sure that the reproductive system is functioning effectively. It’s hormone balancing effects and the effect it has on the uterine wall means that it’s also helpful for couples trying to conceive.

It contains an alkaloid called “fragine”, which is thought to be responsible for the strengthening and toning effect the leaf has on the muscles of the uterus. This toning effect is said to make labour a quicker and less painful process.

Some people say it induces labour but as far as I can tell from the research I’ve done, this isn’t the case. It actually makes the contractions more effective at moving the baby down the birth canal, resulting in a quicker labour.

When Should You Drink It?

There are some concerns about drinking it in early pregnancy as it stimulates the uterine muscles, which could potentially bring on a miscarriage. Although there is no concrete evidence to back this up, every woman is different and if you’ve had a history of early pregnancy complications then it’s best to wait.

Many midwives recommend starting with a cup a day in the second trimester and observing how your body reacts. If you experience any cramping then discontinue use until the third trimester.

Personally, I waited until I was 34 weeks pregnant. I’d had two previous miscarriages and just felt safer knowing that if it did bring on early labour my bun was pretty much cooked and ready to come out of the oven. My baby did end up putting in an early appearance but only by two days so I can safely say that Red Raspberry Leaf Tea didn’t bring on early labour for me.

How Much Should You Drink?

You should start drinking just a cup a day and see how your body reacts. If you have no cramping issues then you can gradually increase your intake to 2 to 3 cups a day in your third trimester.

I foolishly didn’t pay attention to how much I was supposed to drink at the time but I know I was drinking quite a bit more than this. It was summer and I was making litres at a time and leaving it in the fridge. I got quite a taste for it, even though it tastes nothing like raspberries, unfortunately.

I really wanted a natural birth and so went on a mission with this tea along with all the other tricks I’d read about for a quick and easy birth, like eating 5 dates a day and using evening primrose oil. Sadly I ended up needing a Cesarean (after 30 hours of labour!) so it just goes to show that you can prepare all you like, but it doesn’t mean that things will go as you planned.

I sometimes wonder if drinking too much tea may have been an issue but I guess I’ll never know. What I do know is that you should stick to the 2 to 3 cups a day guidelines to get the best benefits. There are millions of women that swear they’ve had quicker, easy births thanks to this.

Even though I didn’t end up having the birth I’d hoped for I still think that Red Raspberry Leaf tea definitely had some good effects on me. I healed really quickly after the Cesarean and had no pelvic floor issues. I’ve also had a constant and plentiful supply of milk, even now 20 months later. Although now I’m kind of wishing it would dry up as weaning a toddler is proving a lot harder than I’d imagined, but that’s another story.

This herbal tea has been used by women for centuries and as long as it’s used correctly it can be very beneficial. Just make sure you buy an organic version that isn’t mixed with any other herbs.

As always, you should check with your doctor before taking any herbal remedies during pregnancy. I’m just sharing my views on the subject and my experiences with it, but we are all different so get the go-ahead from your doctor before you try it.

What have been your experiences with Red Raspberry Leaf Tea? Did it help you during labour? If you have any questions please don’t hesitate, just leave your comments below.

3 thoughts on “Benefits of Red Raspberry Leaf Tea During Pregnancy. When Should You Start Drinking It?”